It’s not about power, it’s all about revenge!

The most anticipated episode “The Bells” of super hit TV series Game of Thrones is finally on-aired. After killing Missandei and Rhaegal in the previous episode, it’s time to retaliate. This episode clearly showed how the daughter of the mad king became furious in the anger of vengeance.

Show starts with the death of Lord Varys. As the queen found that he betrayed her and the punishment of betraying is death. Dany is quite confident for another victory. As the water has already been extended. A time to end egotism of Cersei forever. Here, Tyrion Lannister begged for the millions of innocent citizens of Westeros, but the queen has made her decision and it’s final.

In Westeros, they are also ready and their military is aligned up, and in the sea, their ships are waiting to kill another dragon. They have fixed Scorpion weapon not only on their every ship but also the rooftop of borders to attack Daenerys.

Most-awaited season of Game of Thrones is finally out now!

Meanwhile, Jaime Lannister was caught by Daenerys army and they have confined him in a camp. Tyrion reaches at the camp to meet his brother. He requests Jaimie to ring the bells of Westeros to surrender. Otherwise millions of innocent people will lose their lives. He allowed him to run for Westeros and must ring the bell for laying down of arms. 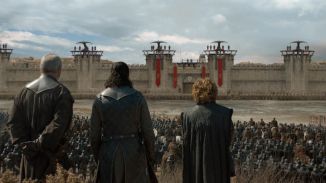 On next morning; both sides of the armies are ready to attack. Daenerys army is waiting for the signal from their queen. Here, the audience witnesses a filmy scene that first winds start moving and then from the top of the sky Daenerys on her dragon come down and smash all the ships before they set a target.

The best film, drama or series is that which you can’t predict!

The battle officially kicks off as the Dany riding on her dragon demolish the gates and give a green signal to her army. On the flip side, she destroys all the scorpion weapons and burns the Westeros army alive. In this panic, Jamie successfully reaches at the top of the tower to sing the bells. And, he completes his promise that he did with Tyrion to surrender.

Game of Thrones 8 episode 2 – A Knight of the Seven Kingdoms!

The bells of the entire city start ringing at once. But wait, here’s a twist. Instead of ending the battle, Daenerys becomes more aggressive. And she decides to burn the entire city and kills millions of innocent civilians. She flies her dragon and burns everything coming on her way. Everywhere is bloodshed, people are running here and there to save themselves from the fierce of the maddest queen.

The Long Night – Most-awaited battle of Game of Thrones!

“The Bells” episode 5 was all about retaliation. After burning innocent people and massive destruction. It’s time for Red Keep. It was considered as the safest place for Queen Cersei but now it’s no more. Meanwhile, Jaime also comes to the palace to save Cersei. She becomes overjoyed to see him and also feel embarrassed about what she did. Her last words, “Jaime, I don’t want to die, not like this.” Here the roof collapses and they both die together.